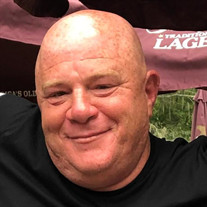 Anthony P. Puorro “Tony” age 57, of Cairo, passed away October 2nd, 2021, in Ormond Beach, Florida with his loving wife by his side. Born November 4th, 1963, in Coney Island, N.Y., Tony is the first son of the late Antonio and Diane (Lobato) Puorro. Growing up in Brooklyn, N.Y., Tony's family relocated upstate to the Catskill's in 1973. Soon after, settling down in Cairo, N.Y., where he attended Cairo-Durham High School and met his high-school sweetheart and wife of thirty six years, Kim. Together they raised three children while owning and operating Evergreen Disposal with their family, for 14 years. To call Tony a family man would be an understatement. He lived for his family. From volunteering with coaching little league and football, to trips up north snowmobiling and four-wheeling. Countless weekends spent boating on the river, and late nights watching high-school sporting events. He was an avid hunter in his younger years, and enjoyed playing softball with his father and three brothers throughout the years. Tony loved becoming a Paw Paw and spending time with his grandchildren. It wasn't uncommon to find him with one of his grandsons out on a truck with him or to find him helping out on the side lines at t-ball. After relocating to Pennsylvania for a short time, Tony and his wife recently moved back to the area to be closer to their children and grandchildren. Here he owned and operated two family businesses with his wife, brothers, and children; Superior Waste Services and Red Rooster Bar & Grill. He shared a second home in Florida with his wife Kim (Puorro Paradise as he would call it) where for almost 15 years he vacationed with family and friends. Never to miss a Daytona Bike Week or Biketoberfest, Tony's passion was riding his Harley Davidson motorcycles. His love for motorcycles and off road UTV riding took Tony and his wife all over the country. They traveled everywhere. Sturgis, SD and Mount Rushmore, Myrtle Beach to West Virginia. This past spring Tony fulfilled a life time dream and rode his motorcycle with friends from Florida all the way to New York. Tony's love for life was as big as his personality. He worked hard, loved hard, and lived hard! The life of the party, always making you laugh, the loudest in the room. His heart just as big as his personality, Tony was always the first to offer help a helping hand. He continued to do so in his after life as an organ donor. Survivors include his loving wife of thirty-six years Kim (Lorenz) – She and Tony would have celebrated their 37th Wedding Anniversary October 13,2021. He is also survived but his children Taryn (Daniel Miller), Anthony (Marc Habel), and Kerry Puorro, and his beloved grandchildren Arik, Abel, Wyatt, Evaan, Damanich, Colton and Everett. He is also survived buy his three brothers Joseph (Marcia), Mario (Penny), and John Puorro, his three sister in-laws Laura Lorenz, Florence Ohle, and JoAnne Rose (Patrick), and numerous aunts, uncles, cousins, nieces, nephews and friends. Memorial Services will be held at Richards Funeral Home, 29 Bross Street, Cairo, N.Y. 12413, on Sunday, October 17th ,2021, from 11:00am – 4:00pm with services being held at 3:30pm at the funeral home that same day. Donations in Tony's memory can be made to the Columbia Greene Humane Society, 125 Humane Society Road, Hudson, N.Y. 12534, or to The Wounded Warriors Project, P.O. Box 758516, Topeka, Kansas, 66675-8515. Condolences may be made at www.richardsfuneralhomeinc.net.

The family of Anthony P. Puorro "Tony" created this Life Tributes page to make it easy to share your memories.