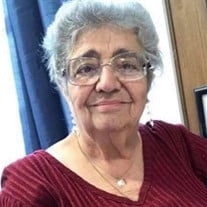 Greenville– Bernadette Rose (Scarpa)Nugent, 81, passed away after a battle with COVID on Wednesday, January 8, 2021 at St. Peters Hospital with family at her side. She was born in Brooklyn on October 8, 1939, to the late John A. and Mary (Maggione) Scarpa. She was employed as a secretary by Mitsui O.S.K. Lines. She ran Bernnadette’s Sweet Shop in Brooklyn which was named after her by her father. She met her Husband of 55 years Ted in Brooklyn’s Grand Prospect Hall. For years they vacationed in the old Chic-A –Dee campground in Cairo and in 1972 moved to Greenville and opened John’s Pizzeria & Restaurant. Greenville was the new home to the Nugent family. In addition to the Pizzeria, Bernadette, Ted and family did many fairs and festivals and were known for their Sausage & Peppers. Bernadette was a communicant of St John the Baptist Catholic Church in Greenville where she was a catechist and a member of the choir where she sang with her family each week. Bernadette also loved working with children and volunteered as an assistant with the Growth Center for at risk youth in the Greenville Central School. Bernadette and family ran Tri-County Enterprises which operated Richards Ambulette and Dove Limousine and Motorcoach. She loved being an aide on the Ambulettes and helping those with disabilities. Bernadette and Ted were also known for their customer service and personality when they ran Stone Willy’s Pizza and Subs at Cumberland Farms in Greenville. Bernadette became the matriarch of her kids family business Scarpa’s Catering, which was named after Bernadette’s father John (Mary) Scarpa. Bernadette loved her kids, grandkids and great-grandkids. She often could be heard saying “ take care of my babies”. She loved Jesus and her faith which she has passed on to her family. We know she is home, and is celebrating with our Dad who she has missed from the day he left us. She was predeceased by her husband Theodore J. Nugent in 2017, her parents John & Mary Scarpa, her brother John Scarpa, Jr. and her brother-in-law Warren Franklin. She is survived by her son Theodore E.(Hope) Nugent; two daughters Kristine (Lou) Pastina and Kathryn(John)Dingman; six grandchildren, Victoria(Kevin) Crawley; Theodore E. Nugent Jr.; Amanda Gossman; Katelyn, Gianna and Louis Pastina; a sister Adrienne (Scarpa) Franklin of Brooklyn; three great grandchildren, Kevin Jr., Reagan and Matthew Crawley; nieces and nephews, Warren(Diane)Franklin, Mary Franklin, Joseph(Felicia) Franklin; her goddaughter Diane Basile and many cousins, friends and extended families at St Johns, the Greenville Fire Company and Richards Funeral Home. Calling hours will take place at Richards Funeral Home, 29 Bross Street, Cairo on Wednesday, January 13th, 2021 from 5pm to 7pm. Masks, social distancing, and funeral home capacity limitations will be in place. A funeral mass will be celebrated at St John the Baptist in Greenville at 10:30am Thursday, January 14th, 2021 followed by interment in the Greenville Cemetery. In Lieu of flowers, donations in her memory can be made to St John the Baptist Church Greenville and the Greenville Volunteer Fire Company. Condolences may be made at www.richardsfuneralhomeinc.net.

Greenville&#8211; Bernadette Rose (Scarpa)Nugent, 81, passed away after a battle with COVID on Wednesday, January 8, 2021 at St. Peters Hospital with family at her side. She was born in Brooklyn on October 8, 1939, to the late John A. and Mary... View Obituary & Service Information

The family of Bernadette Rose Nugent created this Life Tributes page to make it easy to share your memories.

Send flowers to the Nugent family.