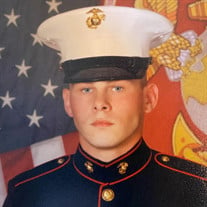 Colby R. Lord, 20, of Coxsackie, NY, passed away on May 15, 2022 unexpectedly. Colby was born on January 31, 2002 to Douglas A. Lord and Victoria L. Scaglione in Albany, NY. Colby was a 2020 graduate of Coxsackie-Athens Central Schools. During his short but well lived life he enjoyed playing on several Little League and Pop Warner teams and moved on to play modified and varsity high school sports; such as, football and wrestling. He was a 2020 Class C Section 2, 182lb. Champion for wrestling, placing 3rd in his weight class. He loved wrestling and was known for his signature takedown move of picking up his opponent and slamming them to the mat. As a child Colby attended Cub Scouts and moved on to Boy Scouts where he earned the highest rank, Eagle Scout in 2020. At the age of sixteen, Colby joined the Earlton Fire Dept. There he found a whole new family. He had earned his interior and exterior firefighting certificates. He enjoyed every moment of being with "his boys". While still in his senior year Colby joined the Marine Corps through their early enlistment program. In August of 2020 he was sent to Parris Island where he worked his way to the title of United States Marine. He graduated boot camp on November 13, 2020 as Private First Class. He then went on to MCT training at Camp Geiger, NC and MOS training at Camp Lejeune, NC. From there he was stationed at Camp Pendleton in California in May of 2021. He was promoted to Lance Corporal May 1, 2021. Besides his parents, Colby is survived by his siblings; Samantha Perry (Tom Heavner), Hunter Perry, and Chase Lord, his nephew, Braeden Morrison who he shared a special bond with. Colby is also survived by his grandparents Robin Lord, Theodora Woodard, and Barb Scaglione, as well as many aunts, uncles, cousins and lifelong friends. Colby is predeceased by his grandfathers; James Lord, Frank Scaglione Sr., and John Slenzo, and Great grandparents Edward and Irene Lord. He was a friend to all, a protector of many, had a smile that could light up a room and he will forever be missed. Funeral arrangements are under the direction of The W.C. Bradys Sons, Inc. Funeral Home, 97 Mansion Street, Coxsackie, New York, 12051. Relatives and friends are cordially invited to attend calling hours at The W. C. Brady’s Sons, Inc. Funeral Home, 97 Mansion Street, Coxsackie, New York, 12051, on Wednesday, June 1, 2022, from 3:00 P.M. – 7:00 P.M. Funeral services will be held at on Thursday, June 2, 2022, at 9:15 A.M. at The W. C. Brady’s Sons, Inc. Funeral Home, 97 Mansion Street, Coxsackie, N.Y., 12051. Interment will follow at 12:00 Noon at The Gerald B.H. Solomon Saratoga National Cemetery, 200 Duell Road, Schuylerville, New York, 12871 with full military honors. In lieu of flowers, please make donations to The Earlton Fire Department, P.O. Box 187, Earlton, New York, 12058-0187, in honor of Colby. Condolences may be made at www.wcbradyssonsinc.net.

Colby R. Lord, 20, of Coxsackie, NY, passed away on May 15, 2022 unexpectedly. Colby was born on January 31, 2002 to Douglas A. Lord and Victoria L. Scaglione in Albany, NY. Colby was a 2020 graduate of Coxsackie-Athens Central Schools. During... View Obituary & Service Information

The family of LCpl Colby R. Lord created this Life Tributes page to make it easy to share your memories.

Send flowers to the Lord family.