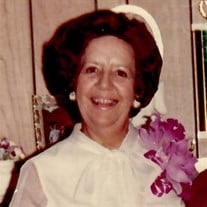 Dorothy Jean Grupe, longtime resident of Cairo, aged 94 years, passed away peacefully at The Pines Nursing Home and Rehabilitation Center, in Catskill, N.Y. on September 30, 2020. She was born in Brooklyn, N.Y. on June 3, 1926 to Andrew and Frances Katta. Besides her parents, Dorothy is predeceased by her husband August in 1994, and her daughter Diana in 2014, as well as her brother Stanley Katta of Brooklyn, N.Y. Survivors include her two sons Mark Grupe (Meredith) and Richard Grupe. She is also survived by a son in law David Cassimore, five grandchildren Heather Jump, Kyle Grupe (Marueen) Trevor Grupe, Michael Grupe (Chelsea,) Britany Rossano (Nick). She also is survived by eight great grandchildren, and many nieces and nephews, and friends. Dorothy moved up to Greene County in 1946 to live with her husband August. There she met many people through his ownership of the Clearbrook Boarding House. Her love of cooking was cultured in that training ground. She interacted with her in laws, Alice and Eddie Savage and their children Linda Steiner Savage, Dorie Savage and Norman Steiner and their children. She was employed at Cairo-Durham School for many years as a secretary, also at story’s Nursery as a bookkeeper. Dorothy had a love of cooking, also cake decorating. Nothing gave her more pleasure than to cook for her family. At her request, a private cremation took place. She will be interred next to her late Husband August in the family plot of the Cairo Cemetery, with a private ceremony at the family’s request. Arrangements are under the direction of Richards Funeral Home, 29 Bross Street, Cairo, N.Y. Contributions in her memory may be made to Community Hospice, 47 Liberty Street, Catskill, N.Y. 12414. Condolences may be made at www.richardsfuneralhomeinc.net.

Dorothy Jean Grupe, longtime resident of Cairo, aged 94 years, passed away peacefully at The Pines Nursing Home and Rehabilitation Center, in Catskill, N.Y. on September 30, 2020. She was born in Brooklyn, N.Y. on June 3, 1926 to Andrew and... View Obituary & Service Information

The family of Dorothy Jean Grupe created this Life Tributes page to make it easy to share your memories.

Send flowers to the Grupe family.