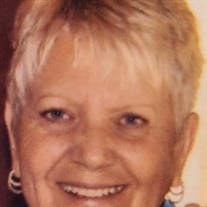 Edith Lozensky, age 73, passed away on March 24, 2021 after a brief stay at St. Peter's Hospital. She was born on June 8, 1947 to Maria and Kurt Kumpert in Frankfurt am Main, Germany. At this point we could tell you about all the inconsequential facts that matter to no one. Instead, we want to share all of the things that made Edith special and that were important to her. The most important people in Edith’s life were her family. Her children, Maria and Charlie were her pride and joy UNTIL her grandchildren, Zachary, Ally, Will and Evan, came along. Then everyone took a back seat. She cherished every single moment with her grandchildren. Whether it was marveling at one of Zachary’s creative projects, getting random love notes from Evan, shopping and sharing secrets with Ally, or laughing at Will’s jokes and antics, no moment was too small. Many joyful afternoons were spent on her wooded patio, or in the dining room, playing cards and games surrounded by her family. This was Edith’s Heaven on Earth. Always by her side was her lifelong love and soulmate Charlie. Although the two of them had the normal ups and downs of any relationship that last 55 plus years, they were truly meant to be together. She was his rock and he hers. She enjoyed riding on the back of his motorcycle and was an active member of the former chapter of Greene County ABATE. She loved being surrounded by the many friends they made. Charlie and Edith spent many evenings talking about how fortunate and blessed they had been over the years, enjoying the life they had built and playing Rummy. She left with a win in the books! Edith was a kind spirit. Her pets were all from rescues or shelters and her devoted dog Sunny was at her side until the end. She never forgot to send a greeting, for any occasion, and is hopeful that we will carry on this tradition, as she has bestowed upon us many, many boxes of cards. She remembered all at the holidays, always had an open door policy and would invite anyone over to have a meal and spend time in her warm and inviting home. Although our hearts are heavy and our lives emptier we are so fortunate and thankful that Edith was our Mom, Grammy and Wife. We will miss her everyday but are better people for having had her as our family. She is survived by her husband of 54 years, Charles Lozensky, her daugher, Maria Hogencamp, son, Charles Lozensky, daughter-in-law, Kelley Lozensky, her beloved and adored grandchildren, her sisters, Linda Drizing and Elizabeth (Kurt) Opitz, nephews Mark (Dominica) Drizing, and Steven Drizing. We would like to thank the nurses and doctors at St. Peter’s ICU and CCU for their care the last few days of her life. At Edith’s insistence there will be no services. She would like everyone to remember her as you knew her in daily life. If you would like, we ask that a donation of supplies or money be made to the Columbia-Greene Humane Society in her honor as this was an organization near and dear to her heart. Messages for family may be made at www.richardsfuneralhomeinc.net.

Edith Lozensky, age 73, passed away on March 24, 2021 after a brief stay at St. Peter's Hospital. She was born on June 8, 1947 to Maria and Kurt Kumpert in Frankfurt am Main, Germany. At this point we could tell you about all the inconsequential... View Obituary & Service Information

The family of Edith Lozensky created this Life Tributes page to make it easy to share your memories.

Send flowers to the Lozensky family.