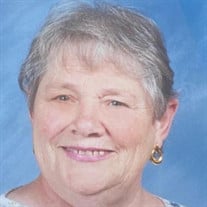 Frances E. (Fran) Matter, age 81, passed away on the evening of April 9, 2022, at her daughter’s home in Earlton, N.Y. She was born on April 15, 1940, in Catskill, N.Y. and was the daughter of Charles Stearns and Evelyn Parks. Besides her parents, Fran is predeceased by her loving husband William (Bill) Matter, who passed away in 2010. Frances few up on South Church Street, in Athens and was in one the first classes to attend the new Coxsackie-Athens High School after its construction. After graduation, she began her long working career which included time at the N.Y.S. Health Department, the N.Y.S. Legislature, the Catskill Daily Mail, and eventually with her husband William (Bill) Matter at Matter Contracting. Fran and Bill were married in 1957, sharing 52 wonderful years with one another. Fran was an active member of The Climax Grange, acting as treasurer for over thirty years. She enjoyed playing in a bowling league which originally played at The Tik Tok Bowling Lanes in Coxsackie and eventually ended up in the Hoe Bowl of Catskill. Also for many years, when this area actually had decent snow, Fran and her husband Bill were part of The Athens SnoCats snowmobile club. She also was an honorary stunt woman, and honor bestowed upon her after her second demonstration of how to roll a vehicle multiple times. Fran is survived by her loving family which includes five brothers and sisters, four children, eleven grandchildren and four great grandchildren, which are the following …Her brother Charlie Stearns, sister Lori Gordon, brother Ronnie Stearns, sister Jeanie and her husband Anthony DelVechio, as well as her sister Nancy and her husband Rick Pratti, her daughter Carol and husband Philip Peters, granddaughter Jennifer and husband Robert Labuff with great grandson Ryland, granddaughter Jessica and husband Dana Camley with great grandsons Braydon and Dylan, grandson Bradly Peters with great granddaughter Mikayla Drescher-Peter, her son William Matter, granddaughter Angela and her husband Justin Gatti, granddaughter Jessica and her husband Guy Loveless, grandson William and granddaughter Casey, her son Wayne and his wife Tahira with grandsons Ash, Zaki, and Zyan, her daughter Colleen and husband Ken Buckley with granddaughter Kaitlin. The family extends much love and appreciation to her nephew Doug Matter, his daughter Jessica, and Loretta Ruby for all of their help and support. Funeral arrangements are under the direction of The W. C. Brady’s Sons, Inc. Funeral Home, 97 Mansion Street, Coxsackie, N.Y. 12051. Family and friends are welcome and are invited to graveside services that will be held for Fran on Friday, May 13, 2022 at 1:30 P.M. at Riverside Cemetery, 288 Riverside Avenue, Coxsackie, N.Y. Family and friends wishing to attend the graveside services are asked to meet in parking lot of The W. C. Brady's Sons, Inc. Funeral Home, 97 Mansion Street, Coxsackie, N.Y. 12051, no later than 1:15 P.M., the day of the graveside service, thence the procession will proceed to The Riverside Cemetery, 288 Riverside Avenue, Coxsackie, N.Y. A celebration of Frances' life for family and friends and everyone who knew Fran will then follow immediately at The Matter Barn on High Hill Road, Earlton, N.Y. 12058. Condolences may be made at www.wcbradyssonsinc.net.

The family of Frances E. (Fran) Matter created this Life Tributes page to make it easy to share your memories.

Send flowers to the Matter family.