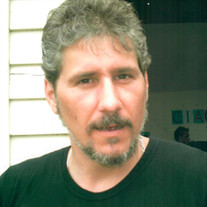 Francis “Frank” V. Pocorobba, Jr. age 54 years, of Cairo, New York, passed away on June 29, 2021, at Columbia Memorial Hospital, Hudson, New York. Frank was born on February 7, 1967, in Catskill, New York, and is the beloved son of Francis V. and Linda (LaBuff) Pocorobba, Sr. Frank is a graduate of The Cairo Durham High School, Cairo, New York. During Frank’s lifetime, he was employed as a carpenter for Universal Forestry in Hudson, New York. He loved the outdoors, and he was an avid cliff jumper and hiker. He also enjoyed bike riding and was a musician. Besides his parents, Frank is survived by his son Ryan Pocorobba and his daughter Catherine Pocorobba, his sister Gina Pocorobba and her finace’ John Trabona, his grandson Benjamin, his nephews Peter J. Kusminsky and David M. Wrigley, and several aunts and uncles and cousins. He is also survived by his beloved friend Linda Bagnardi. A private service for the family will be held at Richards Funeral Home, 29 Bross Street, Cairo, New York, 12413, for the immediate family. Condolences may be made at www.richardsfuneralhomeinc.net.

The family of Francis "Frank" V. Pocorobba Jr. created this Life Tributes page to make it easy to share your memories.

Send flowers to the Pocorobba family.