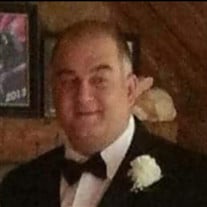 George “Hey Baby Blue Eyes” Acker Sr. of Purling, N.Y. died peacefully surrounded by his loving family after a long illness on January 18, 2020 at the age of 59. George was born on April 25, 1960, in Catskill, N.Y. and is the son of the late George William and Vivienne Joan (Marcelli) Acker. George is survived by his wife Irene of Purling, N.Y. his son George Acker, Jr. and his wife Kelly of New Hartford Connecticut, his daughter Diana Losey and her husband Matt of Indianapolis, Indiana, his son Michael Acker and his wife Ashley of South Cairo, N.Y. George was the loving grandfather to Isabella Acker and Clayton Losey. Other surviving children Andrew Beede of Cairo, N.Y., Alan Beede of Purling, N.Y. George is also survived by his brother William Acker and his wife Janine of Fort Lauderdale, Florida, many aunts, uncles, niece, nephews and cousins. George also leaves behind his beloved furry Grandson companion and partner in crime Buddy. George was reunited with his parents George William Acker and Vivienne Joann Marcelli, and many aunts, uncles, cousins and friends. George is a graduate of Cairo Durham High School. He was a member of the football team in his high school years. Throughout his life he kept involved with sports and coached, assisted coaching to many community teams he was well respected by his community. He always went above and beyond helping a player build their confidence to become a great team player. After 25 years he retired from the N.Y.S. Department of Corrections as Sergeant and Community Supervision. George was an assistant baseball coach at BARD College and he also was employed at C.C.S. Hessel Museum at BARD College as a security manager for six years, both of these careers were shortened due to his illness. George was also the chairman for the Greene County Independence Party. George was a huge fan of The N.Y. Mets and the N.Y. Giants teams he enjoyed watching games, spending quality time with family, bird watching, hiking and playing pool. He will be missed but never forgotten. George M. Acker, Sr.'s Celebration of Life that was to be held on Saturday, April 25, 2020, at 2:00 P.M. at The Catskill Elks Lodge # 1341, 45 N. Jefferson Avenue, Catskill, N.Y. 12414, has been postponed due to the Coronavirus situation. George's Celebration of Life at The Catskill Elks Lodge # 1341 will be rescheduled when the social distancing situation clears, and will be announced with the new date and time. The family expresses sincere thanks for understanding of the situation. Arrangements are under the direction of Richards Funeral Home, 29 Bross Street, Cairo, N.Y. Condolences may be made at www.richardsfuneralhomeinc.net.

The family of Mr. George M. Acker Sr. created this Life Tributes page to make it easy to share your memories.

Send flowers to the Acker family.