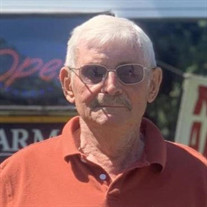 George R. Morrison, age 90 years, of Cairo, N.Y., passed away on February 3, 2022 a t The Pines at Catskill, N.Y. George was born on July 12, 1931, in Highlands, New Jersey, and is the son of the late John and Mable (Carpenter) Morrison. George is a graduated of Cairo Central School, Cairo, New York, and George was a proud veteran, serving in The United States Army during The Korean Conflict and he was very proud to be an American. During his lifetime, he was the owner of Gem Woodstove in Cairo, New York, and he also was employed as a lineman for Central Hudson. He loved traveling, planting and koifish. Besides his parents, he is pre deceased by his sons Kevin and Keith Morrison. Survivors include his son Thomas Vollweiler and his wife Marion, his grandson Kyle Morrison, his granddaughter Rebecca Morrison, and his cousins Doreen and Bill Green, and his wife Barbara Plachter Morrison, and many friends. Funeral services will be held at St. Luke’s Episcopal Church, 50 William Street, Catskill, N.Y. 12414, on Monday, February 14, 2022, at 11:30 A.M. Flowers are acceptable, or if anyone wishes, donations may be made to St. Luke’s Episcopal Church, 50 William Street, Catskill, New York, 12414 in George’s memory. In the springtime of 2022, interment will take place with U.S. Army military honors at the family plot of The Round Top Cemetery, Round Top, New York. Funeral arrangements are under the direction of Richards Funeral Home, 29 Bross Street, Cairo, N.Y. 12413. Condolences may be made at www.richardsfuneralhomeinc.net.

The family of George R. Morrison created this Life Tributes page to make it easy to share your memories.

Send flowers to the Morrison family.