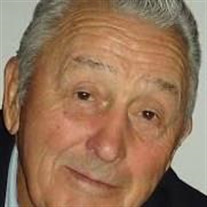 Giovanni "John" Pambianchi, 80, of Cairo, passed away peacefully at home, February 9th, 2015, surrounded by his loving family. He was born January 20, 1935 in the town of Scopolo, province of Parma, Italy to the late Andrea and Luigia Pambianchi. He was the husband of Domenica "Margie" Sforza. They were married on November 4, 1962 in Queens, NY. In 1975, John and Margie moved to Cairo, NY, where they raised their family of three children and five grandchildren. John was employed by Ma- Bell in 1964 as a mechanic for 35 years until his retirement from Verizon. Active throughout his life, John was most at home in the Mountains of Greene County and his hometown in Italy; both offering him the peace and love of his family and friends. John enjoyed hunting, gardening, woodworking, building, and maintaining his home and grounds in Acra. In addition to his wife, John is survived by his two sons; Andrew Pambianchi and his wife Sophia, and Frank Pambianchi and his wife Mokihanna, his daughter; Gina M Pambianchi and his five grandchildren; Giovanni, Kristina, Sophia, Frank and Anthony Pambianchi; his brother; Giuseppe Pambianchi and his wife Clara and his sister; Amelia Pambianchi and two nieces and two nephews, all who reside in Italy; his sister-in-law Jenny DeMaria and her two sons Frank DeMaria Jr. and Nicholas DeMaria and their families The family will receive their friends on Thursday from 7-9 pm and Friday from 2-4 & 7-9 pm at Richards Funeral Home, 29 Bross St. Cairo, NY 12413. On Saturday, the procession will form at the funeral home at 9:00 am. A Mass of Christian Burial will be celebrated at Sacred Heart Roman Catholic Church, 35 Church Street, Cairo, at 10 am. Burial will follow at Round Top Cemetery. To leave an expression of sympathy, please visit www.richardsfuneralhomeinc.net The family requests donations be made to Community Hospice, 47 Liberty Street, Catskill, NY 12414

Giovanni "John" Pambianchi, 80, of Cairo, passed away peacefully at home, February 9th, 2015, surrounded by his loving family. He was born January 20, 1935 in the town of Scopolo, province of Parma, Italy to the late Andrea and Luigia Pambianchi.... View Obituary & Service Information

The family of Mr. Giovanni "John" Pambianchi created this Life Tributes page to make it easy to share your memories.

Send flowers to the Pambianchi family.