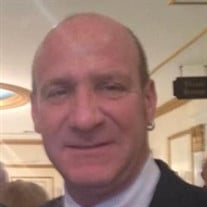 Guy Anthony Schwanse, born on February 20, 1968 passed away on May 24, 2021 from his battle with pancreatic cancer. He was the devoted husband of 27 years to Norma (Celico) Schwanse and loving father to Christian and Nicholas. In addition to his wife and children, Guy is survived by his parents Captain (Ret.) Herb and Grace (Ormando) Schwanse, Sr., his brother Herb Schwanse, Jr. and his wife Lynda, their daughter Rebecca Nga and her husband Hoat, his brother-in-law Giovanni Calabrese and his children Dante and Giovanna along with his in-laws Joseph and Susan (Rand) Celico, Norma Chisnell and Paul Lombardi, his brother-in-law Luke Celico and his children Reagan and Ryan. He is also survived by numerous aunts, uncles and cousins. His sister Dena (Schwanse) Calabrese pre-deceased him on August 9, 2020 as did his brother-in-law David J. Celico on October 3, 2005. Guy was an alumnus of the Weehawken school system and a graduate of The New England Institute of Technology in furniture making and woodworking. Over the years, he held many positions doing carpentry and maintenance, most recently with the Weehawken Board of Education. He was a very talented woodworker and took great pride in his finished product, especially with the work he had done on his home. Guy was a member of the Weehawken Elks and the Weehawken Golf Club since 1994. In addition, Guy was a member of the Hudson Bergen PBA Bowling League and a volunteer Weehawken Little League coach when his sons were younger. Anyone who knew Guy knows he had an enthusiasm and zest for life. His love of music took his family and him to hundreds of concerts over the years. He and Norma often went to plays on Broadway, one of his favorites being A Bronx Tale. In addition, he enjoyed discovering new restaurants and visiting beloved ones, his favorite foods revolving around seafood especially lobster. He and his family were usually traveling to either upstate New York, Rhode Island or Florida to visit with the family he so loved. Friends and relatives are invited and may call at Richards Funeral Home, 29 Bross St., Cairo, N.Y. on Friday, May 28, 2021 from 3:00 P.M. – 7:00 P.M. All are invited to attend the graveside service on Saturday, May 29, 2021 at The Round Top Cemetery at 11:00 A.M. In lieu of flowers, the family is suggesting donations in Guy’s name to Memorial Sloan Kettering Cancer Center, P.O. Box 5028, Hagerstown, MD 21741-5028. Condolences may be made at www.richardsfuneralhomeinc.net.

Guy Anthony Schwanse, born on February 20, 1968 passed away on May 24, 2021 from his battle with pancreatic cancer. He was the devoted husband of 27 years to Norma (Celico) Schwanse and loving father to Christian and Nicholas. In addition to... View Obituary & Service Information

The family of Guy Anthony Schwanse created this Life Tributes page to make it easy to share your memories.

Send flowers to the Schwanse family.