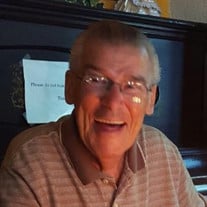 HANS OSKAR “JOHN” SCHINDLER Hans Oskar (John) Schindler, 78, of Cairo, NY passed away peacefully at home on June 6th, 2019. John was born on September 20, 1940 in Tittling, Germany to Therese and Hans Schindler. John emigrated from Germany to Queens, NY in 1961 and a short time later met the love of his life, Frieda. John and Frieda married in 1966 and soon after, his passion for hunting led him to upstate NY. His lifelong dream of owning his own auto repair shop was fulfilled when he purchased Barbato’s Service Station in Cairo, NY in 1972 and moved his family upstate. In 1989, his son, Eddie joined him and the business was renamed Schindler Automotive. In 2018, the third generation, his grandson Nick, joined the family business. John loved hunting, motorcycle riding, soccer and was known as the “Grillmaster” at all family functions but his greatest joy was sipping a beer while being surrounded by his family. John is survived by his wife of 53 years, Frieda (Wolf) Schindler, his children; Eddie (Heather) Schindler, Christine Carey, Karen Schindler and Heidi Schindler; (and known as Opa to) his eight grandchildren; Nick, Reid and Sophie Schindler, Elena and Lucas Budz, and Ava, Robert and Michael Carey. John is also survived by his brothers-in-law Peter (Karen) Wolf and Walter Motz of Germany. He was predeceased by his parents and three sisters. The family would like to express their deepest gratitude to Dr. Robert Schneider and the Community Hospice of Columbia and Greene Counties. Donations in memory of John can be made to the Community Hospice of Columbia and Greene Counties, 47 Liberty Street, Catskill, New York, 12414. Please join the family in celebrating John’s life at the place where people knew him most….Schindler Automotive, 354 Main St. Cairo, NY on Friday, June 14th from noon until the Jagermeister runs dry. Funeral arrangements are under the direction of Richards Funeral Home, 29 Bross Street, Cairo, N.Y. Condolences may be made at www.richardsfuneralhomeinc.net

The family of Hans Oskar "John" Schindler created this Life Tributes page to make it easy to share your memories.

Send flowers to the Schindler family.