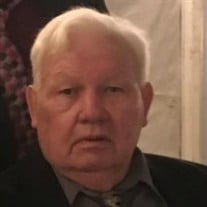 Harold J. “Harry” Fecht, age 82 years, area resident of Leeds, N.Y. for over thirty years, passed away on April 7, 2021. He was born on December 28, 1938, in Brooklyn, N.Y. and is the son of the late Henry and Dorothy (Schuster) Fecht. Survivors include his loving wife of 58 years, Karen, his son Stephen, his daughter Kerry, his daughter Maureen, his son Keith, and his daughter Kindell, his two brothers William and Jackie, eleven grandchildren and one great grandson. He is also survived by several nieces and nephews, and many friends and neighbors. During his lifetime, Harold proudly served his country in The United States Navy from 1956-1962. He was employed as a stone cuter for over forty years for Ottavino and Sons, located in N.Y.C., and he retired from Taconic Bio Science as a team leader. Harry was a very hard worker. He especially enjoyed spending time with his family and loved ones, he and his wife helped raise their two younger grandsons. A few of his hobbies included camping, going on cruises, listening to music and dancing, and he had a special love for animals. Relatives and friends are cordially invited to attend calling hours at Richards Funeral Home, 29 Bross Street, Cairo, N.Y. on Sunday, April 11, 2021, from 12:00 Noon – 3:00 P.M. The United States Navy will conduct Navy Honors at the funeral home at 3:00 P.M. Due to the current pandemic of Covid19, restrictions such as social distancing, wearing of face masks, etc. will strictly be adhered to for everyone’s protection. Funeral arrangements are under the direction of Richards Funeral Home, 29 Bross Street, Cairo, N.Y. 12413. Condolences may be made at www.richardsfuneralhomeinc.net.

The family of Harold J. "Harry" Fecht created this Life Tributes page to make it easy to share your memories.

Send flowers to the Fecht family.