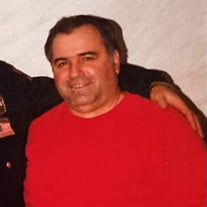 Henry L. “Hank” “Louie” Gardella, Jr. age 79 years, of Purling, N.Y., formerly of Brooklyn, N.Y. passed away on April 2, 2022. He was born on December 26, 1942, in Brooklyn, N.Y., and is the son of the late Henry and Margaret (Dowd) Gardella, Sr. Loving family include his brother Jerry, nieces Danielle, Amanda, Marissa, Samantha, Giavanna “Gia” and Andrea, nephews Craig, David, Nicholas, Mateo, Brody, Maxon, Kevin and Drew, and also many cousins. Besides his parents, he is predeceased by his grandparents and several aunts and uncles. During his lifetime, Henry served in The Army National Guard from January 14, 1963-December 3, 1968. He received his certification from Modern Welding School, and was employed for The Carpenters Local 203 for many years as a welder. He was a welding instructor at Pollaces BOCES. He was also employed as a scuba welder. Henry was an auto mechanic owning his shop in Greene County, he rebuilt cars, he raced cars and also owned H & R racing in Greene County. Hank was also employed at Columbia Auto Parts in Catskill, N.Y., back in the day. Henry loved spending time with his family and friends and also was a lover of animals. One of his most favorite things to do was riding his motorcycle and riding with his friends. In his younger years he belonged to a motorcycle club along with his many friends. He loved photography and his many photo albums can attest to that, he loved woodworking and working with his hands. He was an avid hunter, he enjoyed collecting antique firearms and because of his welding experience and knowledge he applied that talent to creating reloads. Henry was an absolute perfectionist in all of his hobbies and creations and wasn’t happy unless he thought that his creation was perfect. He spent his time studying and reading and self taught himself so that his accomplishments were to his standards. Henry will be sorely missed. Relatives and friends are cordially invited to attend calling hours at Richards Funeral Home of the Mid-Hudson Valley, Inc., 29 Bross Street, Cairo, N.Y. 12413, on Thursday, April 14, 2022 from 4:00 P.M. – 7:00 P.M. Funeral services will take place on Friday, April 15, 2022 at 9:30 A.M. at the funeral home. Interment will follow with U.S. Army honors the family plot of The St. Patrick’s Cemetery, Catskill, N.Y. Condolences may be made at www.richardsfunerlahomeinc.net.

The family of Henry L. Gardella Jr. created this Life Tributes page to make it easy to share your memories.

Send flowers to the Gardella family.