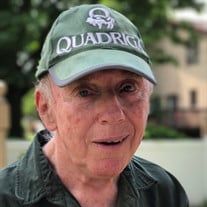 James Francis Cusker, age 84 years, of Fort Lee, New Jersey, passed away on August 4, 2019 after a brief illness. James also resided in Cairo and Coxsackie, N.Y. for a portion of his life. He was born on June 21, 1935, in Brooklyn, N.Y. and is the son of the late James Francis Cusker Sr. and Loretta Shuttleworth Cusker. During James’ lifetime, he worked on Wall Street in Manhattan as an accountant for the security brokerage firms Jesup & Lamont, Inc. and Ingalls & Snyder. He was a devout Catholic and a faithful communicant of the Holy Trinity Catholic Church in Fort Lee, and he was an active member of the Knights of Columbus - Unity Fort Lee Council 8103. James loved sports. He was a league bowler and he treasured the commemorative ring he received for bowling a perfect game. He followed many sports teams and was a lifelong fan of his hometown team, the Brooklyn Dodgers. In his later years, James' greatly enjoyed his friendships and activities during his daily visits to The Richard and Catherine Nest Adult Activity Center Ground in Fort Lee. Besides his parents, James is predeceased by his sisters Patricia Wallace and Mary Ellen Brink, and his nephew James "Chip" Wallace III. Survivors include his nieces Colleen Van Wie (Joseph), Tammi Coburn-Sossei (Steven), Laurie Wallace and Jennifer Wallace, his nephew Jeffrey Wallace, several great nieces and nephews and their children. A Mass of the Christian Burial will be celebrated Saturday, August 17,2019 at 10:00 a.m. at Sacred Heart Church, Cairo, N.Y. Fr. Steve Matthews will be the Celebrant. Interment will follow in the family plot in the Cairo Cemetery. Funeral arrangements are under the direction of Richards Funeral Home, 29 Bross Street, Cairo, N.Y. Contributions in his memory may be made to Holy Trinity Catholic Church, 2367 Lemoine Avenue, Fort Lee, N.J. 07024. Condolences may be made at www.richardsfuneralhomeinc.net.

James Francis Cusker, age 84 years, of Fort Lee, New Jersey, passed away on August 4, 2019 after a brief illness. James also resided in Cairo and Coxsackie, N.Y. for a portion of his life. He was born on June 21, 1935, in Brooklyn, N.Y. and... View Obituary & Service Information

The family of James Francis Cusker created this Life Tributes page to make it easy to share your memories.

Send flowers to the Cusker family.