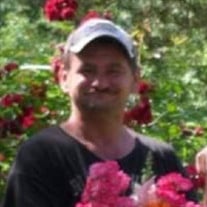 John Frank Komaromi, Sr. age 61 years, of Coxsackie, N.Y. passed away unexpectedly on December 1, 2021 at his residence in Catskill, N.Y. John was born on January 26, 1960, and is the son of the late Joseph Komaromi, Sr. and Matilda Komaromi of Coxsackie, New York. Besides his father, John is predeceased by his two brothers Joseph L. Komaromi II and Steven T. Komaromi and his sister Elizabeth K. Komaromi. Besides his mother, John is survived by his son John Komaromi II, his daughter Matilda Komaromi, brothers Michael P. Komaromi, Gyorgy Komaromi and his wife Tanya, Anna M. Calafiore and her husband Joseph, Karl W. Komaromi, James G. Komaromi, and his sister Margaret M. Perry and her husband George G. Perry, Kristopher K. Komaromi - his adopted brother Robyn A. Komaromi, his adopted sister that was adopted by Joseph Komaromi Sr. (deceased) and Matilda Komaromi. John is also survived by his grandchildren and his nieces and nephews. During his lifetime, John served in The U.S. Marines and he was a hard working man that would help everyone when needed. He loved his family’s traditions - he also enjoyed cooking, farming, gardening, junking and he also always had a joke to say. John always had a smile on his face as he greeted everyone with a warm welcome at the door. He was a caring man who loved his mother and his father and also his family and friends. John was a wonderful father, son, grandfather who was loved by his family and he will be sorely missed. Relatives and friends are cordially invited to attend calling hours at The W. C. Brady’s Sons, Inc. Funeral Home, 97 Mansion Street, Coxsackie, New York, on Thursday, December 9, 2021 from 4:00 P.M. – 6:00 P.M. There will be a gathering of family and friends following the visitation on the 9th. at The Earlton Fire House, Route 81, Greenville, New York, 12058. Graveside services will be held on Friday, December 17, 2021 at 10:00 A.M. at the family plot of The Riverside Cemetery, Coxsackie, New York. Condolences may be made at www.wcbradyssonsinc.net

John Frank Komaromi, Sr. age 61 years, of Coxsackie, N.Y. passed away unexpectedly on December 1, 2021 at his residence in Catskill, N.Y. John was born on January 26, 1960, and is the son of the late Joseph Komaromi, Sr. and Matilda Komaromi... View Obituary & Service Information

The family of John Frank Komaromi Sr. created this Life Tributes page to make it easy to share your memories.

Send flowers to the Komaromi family.