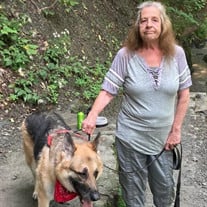 Not sure what to send?

Louise E. Szabo, age 62 years, area resident of Cairo, New York, since 1994, passed away on Monday, June 20, 2022, at St. Peter’s Hospice, Albany, New York. She was born on February 21, 1960, in Brooklyn, N.Y. and is the daughter of the late Gillis Brouillette and Audrey (Brouillette) Gillis of Cairo, New York. Besides her mother, survivors include her loving husband of almost thirty years Vincent of Cairo, her son Vincent W. Szabo of Cairo, and her two sisters Michelle Garcia-Smith of Cairo, N.Y. and Margaret Santiago of Tennessee, and many friends and coworkers. During Louise’s lifetime, she was previously employed as a teacher’s aide for The Cairo-Durham School District, and currently she was employed as a supervisor at C.V.S. located in Cairo, New York. She will be fondly remembered for her kindness and friendliness while working at C.V.S. by her coworkers and customers. She loved spending time with her family, and also she enjoyed camping and hiking with her family. Louise loved animals, especially German Shepherds, and she and her husband have rescued them from shelters. She was a “Second Mom” to her Son’s friends, and it was as though she adopted them as her own. Relatives and friends are cordially invited to attend calling hours at Richards Funeral Home, 29 Bross Street, Cairo, New York, 12413, on Monday, June 27, 2022, from 4:00 P.M. – 7:00 P.M. Mass of the Christian Burial will be celebrated on Tuesday, June 28, 2022, at 11:00 A.M. at The Sacred Heart Church, Cairo, New York. Interment will follow in the family plot of The St. Patrick’s Cemetery, Catskill, New York. Since Louise had such a beautiful love for German Shepherds, those wishing may make donations in Louise’s memory to The German Shepherd Rescue of New York (G.S.R.N.Y.) P. O. Box 242, Delmar, New York, 12054. Condolences may be made at www.richardsfuneralhomeinc.net.

The family of Louise E. Szabo created this Life Tributes page to make it easy to share your memories.