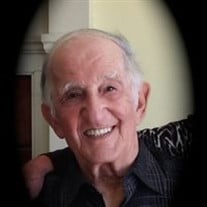 Michael J. Pieruzzi, age 84 years of Athens, passed on into eternal life on August 9, 2014. He was born in Athens, NY on April 23, 1930 at his family’s home on North Franklin Street, and was the son of the late Carlo and Josephine (Mauro) Pieruzzi. On August 20, 1950, Michael married his high school sweetheart Mary Catherine (Clark) Pieruzzi. He was a devoted husband, loving and generous father to his three children and an admirable grandfather to his five grandchildren and four great-granddaughters. Michael continuously set the finest examples of compassion, devotion and generosity through his strong Catholic faith to family, friends and neighbors. An energetic and good natured man, “Mikie” always displayed a smile for everyone. He is survived by his wife of 64 years, Mary Catherine (Clark) Pieruzzi, as well as daughter Claudia Sullivan and her husband William, son Gordon Pieruzzi and his wife Margaret, and daughter Christine Gerrain and her husband David. He is also survived by his grandson Nathan Pieruzzi (Ti8ffany), granddaughters Jayme Harford (Thomas), Alison Sullivan and Catherin Gerrain, grandson Tristan Gerrain, and his four beautiful great granddaughters Gwenyth and Angeline Harford and Lydia and Marie Pieruzzi. He is also survived by his living sister Rose (Pieruzzi) Lennon, very dear sister-n-law Peggy Pieruzzi, and many beloved nieces, nephews, cousins and friends. Michael is predeceased by his three brothers Anthony, James and John Pieruzzi, his adoring sister Mary (Pieruzzi) DiPerna, as well as his dear mother-in-law Mildred Clark. In 1963, Michael went to Greenland where he worked at the Government Army Depot Missile and Power Plant sites at Camp Century and Camp Tuto. He was then employed by the US Government-H.U.D. Albany for over 30 years. He was a lifetime member of the Athens Fire Department as well as a member of the Athens Paddock Club, Board of Education for Coxsackie-Athens School, Athens Little League, and St. Patrick’s Roman Catholic Church of Athens. He was also an avid golfer and very dedicated fan of the New York Yankees. Relatives and friends are cordially invited to attend calling hours at Richards Funeral Home 28 North Vernon Street, Athens, NY on Wednesday, August 13, 2014 from 4:00-8:00 p.m. Mass of the Christian Burial will be celebrated on Thursday, August 14, 2014 at 10:00 a.m. at St. Patrick’s Roman Catholic Church, in Athens, NY. Interment will follow at the family plot in the old Athens Rural Cemetery in Athens, NY. In lieu of flowers, donations may be made in Michael’s honor to the American Lung Association and/ or the American Heart Association. Condolences may also be made at www.richardsfuneralhomeinc.net.

Michael J. Pieruzzi, age 84 years of Athens, passed on into eternal life on August 9, 2014. He was born in Athens, NY on April 23, 1930 at his family&#8217;s home on North Franklin Street, and was the son of the late Carlo and Josephine (Mauro)... View Obituary & Service Information

The family of Michael J. Pieruzzi created this Life Tributes page to make it easy to share your memories.

Send flowers to the Pieruzzi family.