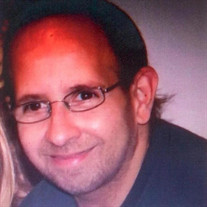 Michael A. Scalera was called home on July 12, 2017 at Albany Medical Center, he was 40 years old. Michael was born on October 1, 1977 to John and Maryann Scalera. Michael grew up in Athens, NY and graduated from the Coxsackie- Athens School District. After High School, Michael worked as a chef at Pleasant Acres and most recently worked in the security office at Sleepy-y Hollow Lake, Michael enjoyed watching sports and loved the Yankees and Giants. He also enjoyed cooking, fantasy baseball with friends and especially Sunday dinner with family. Michael fought a difficult, but courageous battle for over 20 years with Kidney Disease. Michael always managed to work through the pain and come back on top. The highlight of Michael’s life was his 5 year old princess Makayla. Even as the end neared, she still could always make hi smile! Michael is survived by his parents John and Mary Ann Scalera of Athens, his wife Sarah Scalera and daughter Makayla Scalera of Athens, his sister Sarah Scalera of Athens, his sister Sandra Francis and her husband Russell of Coxsackie, twin brother Marc Scarlera and his wife Holly of Athens, his father in law Lawrence Van Dyke of Catskill, his sister and brother in law Shannon and Rich Slater of Coxsackie, his niece and nephew Stephanie and Russell Francis of Coxsackie, his niece and nephew Alyssa and Nicholas Scalera of Athens, his nephews Alex and Kaleb Slater of Coxsackie, along with many other Uncles, Aunts, and Cousins. His brother John A. Scalera, his Grandmother Anna Zanchelli and his Uncle Addolorato Zanchilli preceded him in death. Calling hours will be Friday, July 14, 2017 from 4:00 P.M. – 8:00 PM at Richards Funeral Home, 28 North Vernon Street, Athens, N.Y. Mass of Catholic Burial will be Saturday, July 15, 2017, at 10:00 A.M. at the St. Patrick’s Church in Athens, N.Y. Interment will follow in the family plot of The Athens Rural Cemetery. Donations in his memory may be made to The Highlight of Michael’s Life, his 5 year old daughter Makayla, at any branch of The National Bank of Coxsackie. Condolences may be made at www.richardsfuneralhomeinc.net.

Michael A. Scalera was called home on July 12, 2017 at Albany Medical Center, he was 40 years old. Michael was born on October 1, 1977 to John and Maryann Scalera. Michael grew up in Athens, NY and graduated from the Coxsackie- Athens School... View Obituary & Service Information

The family of Mr. Michael A. Scalera created this Life Tributes page to make it easy to share your memories.

Send flowers to the Scalera family.