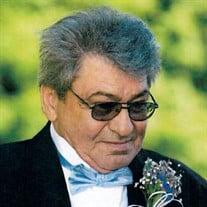 Pasqualino Galli, 77, of Coxsackie, New York passed away on April 7, 2022, at St. Peter’s Hospital in Albany, New York. He was born to parents Domenick and Bianca Galli, on July 5, 1944, in Regio Calabria, Italy. Pasqualino spent much of his working life as a taxi and limousine driver in New York City. Pasqualino is survived by his daughters Marlene Duncan and her husband Brian, Dina Schauer and her husband Dwight, Jennifer Ghanai and her husband Kelani as well as his sons Dominick and Patrick Galli. Pasqualino was pre-deceased by two granddaughters, Melissa Davis and Naomi Lynn Galli. He is survived by 8 grandchildren. Michael and Gigi Davis, Chris Park, Sarah Todaro, Kailene and David Galli, Chelsea Galli, Ashton Hassan, and 1 great grandson, Cole Coons. Pasqualino will be inurned in the family plot of St. Mary’s Cemetery, Rye Brook, N.Y., where his parents are laid to rest. Arrangements are under the direction of Richards Funeral Home, 29 Bross Street, Cairo, N.Y. 12413. Condolences may be made at www.richardsfuneralhomeinc.net.

The family of Pasqualino Galli created this Life Tributes page to make it easy to share your memories.

Pasqualino Galli, 77, of Coxsackie, New York passed away on April...

Send flowers to the Galli family.