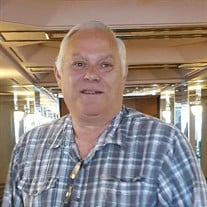 Raymond Dean Berg Loving Husband, Father and Grandfather Retired Investigator Greene County Sheriff Department Raymond Berg, age 66 years, of South Cairo, N.Y. passed away at his home surrounded by his loving family on February 3, 2021 after years of battling Agent Orange Exposure. Raymond was born on April 18, 1954, to the late William and Marietta Swazey Berg. Besides his parents, Ray was predeceased by his brothers Galen Berg and Robert Jordan. Raymond is survived by his Diane Pine Berg, his children Dorothylee, George and Jeffrey Berg all of South Cairo, his grandchildren whom he adored, Mykal, Cheyenne, Ryley and Tanner, his brothers Alan Berg of South Cairo and William (Marsha) Berg of Cairo and sister Elaine Hellenschmidt Donnelly of Sebastian, Florida. Survivors also include his extended family Dawn (Pine) Suttmeier of Purling, Edward (Gayle) Pine of Orlando, Florida, and William (Nancy) Pine of South Cairo, and several nieces and nephews, and friends and neighbors of the community. Raymond was a Vietnam Veteran having served proudly and honorably in The United States Army as a helicopter Crew Chief. Raymond started his Police Career with The Cairo Police Department in 1980. In 1982 he became Deputy Sheriff with The Greene County Sheriff Department, later being appointed to Investigator where he started the original Greene County Fire investigation Team. He received The New York State Fire Investigator of the Year Award in 1991 at The NYS Fire Academy in Montour Falls, New York. After serving the people of Greene County for twenty years, he retired and returned to work with the Operating Engineers, then Local 106, Albany, New York operating Heavy Equipment. Ray had a great love for the outdoors. He enjoyed hunting, boating, fishing, kayaking, riding his ATV and camping in The Peru, NY area where he spent many of his last summers. Most of all he loved every minute spent on his restored 1955 Ford Tractor. Ray’s memberships included the International Union of Operating Engineers, The Local 158, Albany, NY, a lifetime member of The Cairo Hose Co., a member of the Norton Hill Wildlife Club and Ray was also a past member of the Catskill Elks Lodge #1341. Funeral arrangements are under the direction of Richards Funeral Home, 29 Bross Street, Cairo, N.Y. 12413. Memorial services will take place at Richards Funeral Home, Cairo, N.Y. on Saturday, February 13, 2021, from 1:00 P.M. – 3:00 P.M. The United States Army will conduct military honors at the funeral home at the conclusion of the memorial services. Interment will be private. In lieu of flowers, donations in Ray’s memory may be made to The Cairo Development Foundation, Box 251, Cairo, N.Y. 12413, donations will be toward the construction of the Veteran Memorial for the Pocket Park at the Angelo Canna Town Park, Joseph D. Spencer Lane, Cairo, N.Y. 12413. Condolences may be made at www.richardsfuneralhomeinc.net.

The family of Raymond D. Berg created this Life Tributes page to make it easy to share your memories.

Send flowers to the Berg family.