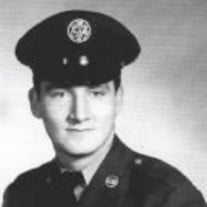 Robert J. Carey, Sr., age 85 years, of Cairo, N.Y. passed away on August 9, 2021. He was born on January 10, 1936, in Brooklyn, N.Y. and is the son of the late Michael and Anne (Gaston) Carey. Besides his parents, he is predeceased by his son Robert, Jr., and also his sister Sandra Moriarity. Survivors include his loving wife of 57 years Jane Carey of Cairo, N.Y., his two Daughters Christina and Eric Kuever and Heather and Peter Maassmann, two sisters Maureen Tierney of Florida and Judith Walsh of N.J., two brothers Michael Carey, Jr. of PA, and Edward Carey of Staten Island. Survivors also include his five grandchildren Alley and Peter Maassmann, Ava, Michael and Robert Carey III, and numerous nieces, nephews, and friends. During Bob’s lifetime, he served his country proudly in The United States Air Force from 1954-1962. He was employed as a flight dispatcher for over 32 years and retired from United Airlines. Bob was especially proud that he created the Cairo Playground and that he was a Councilman for The Town of Cairo and being a Republican. He loved to have lunch with the “Good Old Boys” in the Town of Cairo. Bob also enjoyed spending time with his family, he also enjoyed being an avid puzzler, and he loved doing cryptograms, and his hobby of wood whittling. Graveside services will be held on Friday, August 13, 2021, at 11:00 A.M. at the family plot of The Round Top Cemetery, Round Top, N.Y. Donations in Robert's memory may be made to Community Hospice, 47 Liberty Street, Catskill, N.Y. 12414. Funeral arrangements are under the direction of Richards Funeral Home, 29 Bross Street, Cairo, N.Y. Condolences may be made at www.richardsfuneralhomeinc.net.

The family of Robert J. Carey Sr. created this Life Tributes page to make it easy to share your memories.

Send flowers to the Carey family.