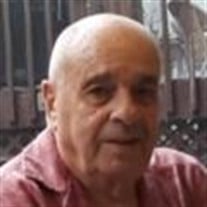 Robert E. “Bob” Gatto, age 82, of South Cairo, NY passed away after a brief illness on October 5th, 2019 at St. Peter’s Hospital surrounded by his loving family. Bob was born on April 6th, 1937 in Huntington, NY to parents Frank and Madelyn (Bergin) Conroy. He worked 35 years as a supervisor for Lebanon Chemical Corp. in Jamesport, NY. Bob served his community as a volunteer firefighter in Northport, Long Island and later in life as a devoted groundskeeper, sacristan, and eucharistic minister at Sacred Heart Church in Cairo. He enjoyed gardening, rooting for his beloved Yankees, and spending time with his canine companion Minni as well as his friends at the local Stewart’s Shop. His greatest joy in life however was his family who was a source a great joy to him. In addition to his parents, Bob is predeceased by his loving wife Lena (Demarco) Gatto, daughter June Abbatiello (Dominick), and brother Donnie Gatto. Also predeceased by Doreen Gatto. Survivors include his children Joanne Butterworth (John), Joe Collica, Judy Loughman (Daniel), and Janet Collica, siblings Frank Gatto, Joseph Conroy and Judith Jordan, eight grandchildren, nineteen great-grandchildren, two great-great-grandchildren, and several cousins, nieces, and nephews. He is also survived by Bobby, Ronnie, and Barbara Gatto. Relatives and friends are invited to attend calling hours on Thursday, October 10th, 2019 from 4-7pm at Richards Funeral Home of the Mid-Hudson Valley Inc., 29 Bross St., Cairo, NY. Mass of Christian Burial will take place on Friday, October 11th, 2019 at 11am at Sacred Heart Church, Cairo followed by interment in the Cairo Cemetery. Condolences may be made at www.richardsfuneralhomeinc.net.

The family of Robert E. "Bob" Gatto created this Life Tributes page to make it easy to share your memories.

Send flowers to the Gatto family.