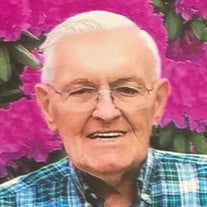 Thomas E. McManus, 90, of Albany, NY, formerly of Glenmont and Coxsackie, NY and Barefoot Bay, FL, passed away on December 4, 2021 at St. Peter’s Hospital in Albany, NY, with his family by his side. Born in Schenectady, NY on June 18, 1931, he was the son of the late Thomas E. and Alice Mulvihill McManus. He was a 1948 graduate of Christian Brothers Academy in Albany, NY. Tom served in the U.S. Army from 1951-1953, attaining the rank of Sargeant. He served in Germany with the U.S. Constabulary and the 14th Armored Cavalry Regiment. He married Patricia Hope on August 20, 1955, and they spent 65 wonderful years together before she passed in 2020. Tom retired from the New York State Department of Motor Vehicles in 1988, after 36 years of State service, 25 of them with DMV. His last assignment with DMV was as Director of the Office of Vehicle Safety and Regulation. He started with the State in the 1950s, working at the NYS Alcohol Beverage Control Board, the Department of Civil Service, and the Department of Corrections before beginning his career with the NYS DMV. Tom was a parishioner of St. Mary’s in Coxsackie where he was a lector for many years, was a member of the Knights of Columbus, served on the cemetery committee and in the 1970s taught religion classes. He spent several years as a Cub Scout leader in Coxsackie in the 1960s and 1970s. He was a Village Trustee for the Village of Coxsackie from 1962-1964 and a Town Councilman for the Town of Coxsackie in the 1990s. He was also a member of the Coxsackie Junior Chamber of Commerce and served as its President one year. Tom was an avid do-it-yourselfer around the house and was always ready to lend a helping hand to others. He and Pat liked to travel and visited Hawaii, Ireland, New Orleans, the Grand Canyon and San Francisco and made many trips to Ogunquit, Maine. For twenty years, Tom and Pat were snowbirds, and enjoyed spending the winters in their home away from home in Barefoot Bay, FL. In addition, he fulfilled a lifelong ambition in 1980 and became a pilot, a hobby he enjoyed for many years. Tom and Pat had many dear friends in the Coxsackie area and regularly got together with them for dinners and card games. Tom was an avid reader of books, newspapers and magazines. He was also an expert at crossword puzzles and enjoyed working on them every day. He was always ready to lend a helping hand, offer level-headed advice or lighten the mood with a Dad joke. He was a devoted husband to his dear wife Patricia and was always by her side through her Alzheimer’s journey in their later years. He loved spending time with his family, shared different common interests with each of his children, was especially close with his grandchildren, loved playing with his great grandchildren and always enjoyed visits with his extended family. He set a wonderful example of honesty, integrity and helpfulness and will be dearly missed by his family and friends. He is survived by his children Mary McManus of Ballston Spa, NY, Thomas (Allison Smith) McManus of Athens, NY, Catherine (Keith) Henchey of East Greenbush, NY; his beloved grandchildren, Christopher (Brittany MacFarland) Henchey of Brookline, NH, Kevin (Jenna) Henchey of Fairbanks, AK, and Carl Henchey of East Greenbush, NY; and 5 precious great grandchildren. He is also survived by many nieces and nephews. In addition to his wife and parents, Tom was predeceased by his brother Richard McManus and sister Judith McManus, his niece Elizabeth Sherwin and his sisters-in-law and brothers-in-law. The family would like to thank the staff and residents at Atria Crossgate for their friendship and assistance to Tom over the past year, and the doctors and staff at St. Peter’s Hospital for their care and compassion. Relatives and friends are cordially invited to attend calling hours at The W.C. Brady’s Sons Inc. Funeral Home, 97 Mansion Street, Coxsackie, New York, 12051 on Monday, December 13, 2021, from 10:00 A. M. – 12:00 Noon. Mass of the Christian Burial will be celebrated on Monday, December 13, 2021, at 12:00 Noon at The St. Mary’s R.C. Church, 80 Mansion Street, Coxsackie, New York, 12051. Interment will follow in the family plot of The St. Mary’s Parish Cemetery, Coxsackie, New York. Condolences may be made at www.wcbradyssonsinc.net

Thomas E. McManus, 90, of Albany, NY, formerly of Glenmont and Coxsackie, NY and Barefoot Bay, FL, passed away on December 4, 2021 at St. Peter&#8217;s Hospital in Albany, NY, with his family by his side. Born in Schenectady, NY on June 18,... View Obituary & Service Information

The family of Mr. Thomas E. McManus created this Life Tributes page to make it easy to share your memories.

Send flowers to the McManus family.