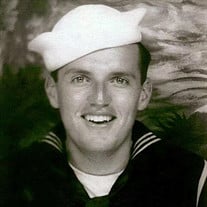 Thomas “Tommy” Rogers, age 92 years, lifetime area resident of Cairo, N.Y. passed away on November 9, 2019. He was born on February 6, 1927, Hoboken, N.J. At three months of age, he and his young widowed Mother Loretta (Hatfield) Rogers moved back to Cairo to the Hatfield Brother’s Farm where his Mother, and his five bachelor uncles John, Joe, Vin, Gene and Tom Hatfield would raise him. At a mere 12 years of age, Tommy started working on cars at Canniff’s Garage and it turned out to be his lifelong career. Tommy attended Cairo Central School. While attending school, Tommy also worked as a truck driver/mechanic for Creamery Carrriers in Cairo, At the tender age of 17, he was driving tractor trailers full of milk down to N.Y.C. Although he was all set to graduate with his class in June of 1945, he chose to enlist in the U.S. Armed Services at the age of 17, therefore he would be able to choose his military branch. On February 9, 1945 Tommy enlisted in The U.S. Navy, and he still was able to obtain his High School Diploma. Tommy was a part of the CB Detachment 1153, 140th Naval Construction Battalion stationed on Manus Island in the Admiralty Islands in the South Pacific. Upon his return from the service, Tommy worked as a mechanic at Peckham Industries, Andy Zimmer’s Garage in Cairo, Ed’s Service Center in Catskill, N.Y. and White Truck in Albany, and for Ray French’s Garage in Hudson and East Windham. On June 21st. 1951, Tommy opened Tom Rogers Garage proudly serving the Town of Cairo residents, and the Cairo-Durham Central School Bus Fleet to this day. On November 21st. 1954, Tommy married the love of his life Hilda (Holdridge) in her family’s home in South Cairo. They were able to spend 56 wonderful years together before Hilda’s passing on December 30, 2010. A dedicated Fireman, Tommy has been a member of The Cairo Hose Co. for 76 years, joining at the tender age of 16. Over the years, he has served as President, Assistant Chief of Cairo Hose Co., President of The G.C.V.F.A., served on G.C. Fire Advisory Board, as well as being a Member of The Kedemah Masonic Lodge #693 in Cairo, The V.F.W., and other organizations. He dedicated himself to his community and the fire service A Pillar of his community, and just a good guy, you won’t find many people that Tommy hasn’t helped in some way over the years. Tommy is survived by his son David (Ginny) Rogers and his beloved Twin Grandsons Cody and Dustin Rogers. Relatives and friends are cordially invited to attend calling hours at Richards Funeral Home, 29 Bross Street, Cairo, N.Y. on Friday, November 15, 2019, from 2-4 and 5-7 P.M, and on Saturday, November 16, 2019, from 2:00 P.M. - 4:00 P.M., with Military Honors taking place at 3:30 P.M. at the funeral home. The Cairo Hose Company will hold services at the funeral home Friday evening at 6:30 P.M. and Kedemah Masonic Lodge # 693 Cairo, will hold services Friday evening at 6:45 P.M. at the funeral home Condolences may be made at www.richardsfuneralhomeinc.net.

The family of Thomas "Tommy" Rogers created this Life Tributes page to make it easy to share your memories.

Send flowers to the Rogers family.