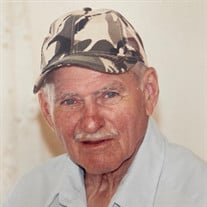 Our beloved William J. Van Alstyne of Coxsackie went home to be with Our Lord and Savior on March 10, 2022, at the young age of 94, joining his beloved wife of 62 years Blanche E. Van Alstyne. He died peacefully at The Albany Stratton V.A. Medical Center Nursing Home, Albany, N.Y. surrounded by his loved ones. He was born on November 6, 1927, the son of the late William D. Van Alstyne and Catherine (Prendergast) Van Alstyne. William attended Coxsackie School District and enlisted in The United States Navy in 1945, where he served his country proudly for two years, on The U.S.S. Gunston Hall LSD5 at Bikini Atoll during the atomic bomb testing of Able and Baker. He received the WWII Victory medal and thereafter, served for five years in The U.S. Navy Reserves. After serving his country, he became a mason/bricklayer with Beltrone Construction for many years and then joined The Bricklayers Union Local 2. He thereafter, went to work on the maintenance team for the Department of Corrections at Greene Correctional Facility from where he retired. He also worked at Cortina Valley Ski Resort as a Courtesy Patrol Director. In William's younger years, he served as an altar boy at St. Mary's R. C. Church, Coxsackie, N.Y.Later on he was a member of The Coxsackie Sportsmen Club, The American Legion, and the Coxsackie Seniors. Growing up on the Hudson River, William was well regarded for saving a life or two on the river and helping people in distress. He loved boating, water skiing, downhill skiing (well into his 80’s), kayaking, fishing, hunting, target shooting, traveling, singing and dancing, flowers and gardening, he enjoyed teaching his children and grandchildren many of these things. William loved spending time with his family and he was a very devoted husband, father, grandfather, great grandfather and great-great grandfather, leaving a family legacy totaling almost 100 strong. In addition to his wife Blanche E. Van Alstyne, William was also predeceased by his sister Elizabeth Meredith. Survivors include his sisters Jean Pfeffer and Carolyn Riley, his brothers John (Tom) and Francis (Bob) Van Alstyne, as well as his seven children; William A. Van Alstyne (Heidi) of New Baltimore, Catherine Coutu (William) of Waterford, Lorrie Dudley (Tim Dormady) of Stephentown, Stephen Van Alstyne (Annabelle), of Greensboro, NC, Robert Van Alstyne (Joanne) of South Cairo, Lisa Raymond of Coxsackie, and John Van Alstyne (Holly McCabe) of Ravena. In addition he is survived by his 42 grandchildren, 42 great grandchildren and four great- great grandchildren. Calling hours will be held at The W.C. Brady’s Sons, Inc. Funeral Home, 97 Mansion Street, Coxsackie, N.Y. 12051, on Friday, March 18, 2022, from 3:00 P.M. – 7:00 P.M. Mass of the Christian Burial will be held at The St. Mary’s R.C. Church, 80 Mansion Street, Coxsackie, N.Y., on Saturday, March 19, 2022, at 10:00 A.M. Interment will follow in the family plot of St. Mary’s Parish Cemetery, Route 385, Coxsackie, N.Y. with U.S. Navy Honors. The family would like to thank the doctors, nurses, and support staff on 9C of The Albany Stratton V.A. Medical Center Nursing Home for the excellent care shown to “Billy Blue Eyes” as they referred to William, as well as the great compassionate care shown to the family during his stay there. Memorial contributions in William’s memory may be made to The Alzheimer’s Association, Northeastern New York, Pine West Plaza, Building 4, Suite 405, Washington Avenue Ext., Albany, New York, 12205-5515. Condolences may be made at www.wcbradyssonsinc.net.

Our beloved William J. Van Alstyne of Coxsackie went home to be with Our Lord and Savior on March 10, 2022, at the young age of 94, joining his beloved wife of 62 years Blanche E. Van Alstyne. He died peacefully at The Albany Stratton V.A. Medical... View Obituary & Service Information

The family of William J. Van Alstyne created this Life Tributes page to make it easy to share your memories.